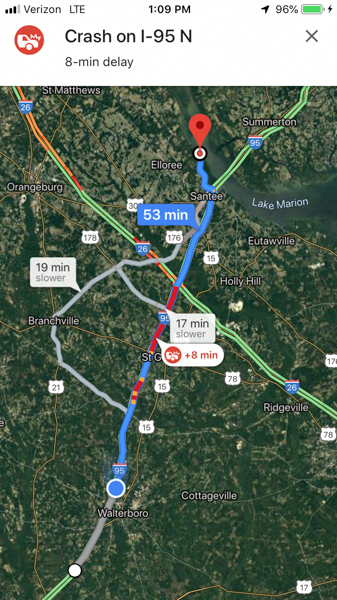 Feeling relieved to have survived the 120-mile drive on I-95, we happily pulled into Santee State Park’s spacious Cypress View Campground. We backed in easily to our site that appeared to be the only empty one in the middle of a holiday weekend. The next day, we visited Fort Sumter and Charleston and came back to an empty campground. For the most part, it stayed that way until we packed up and left four days later. We basically had the entire back forty to ourselves while camped at Santee.

After our day trip to the coast, we spent the remainder of our time within the state park. Vivian would finally do some fishing from the inflatable kayak on Lake Marion two mornings in a row. Meanwhile, I explored the large wooded state park by bike. I loved every minute of it, except for that one time when I dropped my wallet in front of the RV door and didn’t notice it was missing until I was 10 miles into my bike ride. I raced back to the campsite, not knowing where the wallet had dropped but suspected it was near the RV. And there it was, in clear view next to the stairs where it had laid for an hour.

Santee State Park is adjacent to Lake Marion, the largest body of water in South Carolina and the result of the largest earth moving project in U.S. history. It is essentially a reservoir along with Lake Moultrie created by the damming of the Santee River in the 1940s. Lakes Marion and Moultrie are separated by a canal and together have 450 miles of shoreline. This, like so many other reservoirs were made to supply hydroelectricity to rural areas of the south as part of Franklin Roosevelt’s New Deal. And as with many of the other reservoirs, its creation came at a cost. As the largest earth moving project, 160,000 acres of pine forests and swamp were flooded. Submerged in Lake Marion is the town of Ferguson and curious folks in kayaks can find some of the remains of the watery ghost town. One of the interesting views of Lakes Marion are several cypress trees standing in the water. Apparently, the creation of the reservoir was a rush job (we had just entered WWII) and they flooded the area before many of the trees could be cleared.

Camping at Santee allowed us the opportunity to continue our intensive history lesson of the Civil War by visiting Fort Sumter near Charleston which proved to be a turning point for me in my Civil War lessons. Fort Sumter is one of many sea harbor forts built along the Atlantic coast as a defense against attacks on important seaports, such as Charleston.

On April 10, 1861, confederate forces in Charleston demanded Fort Sumter to surrender knowing that a resupply ship was on its way from the north. The commander, Maj Robert Anderson refused. On April 12, confederates opened fire with cannons. The next day, Anderson surrendered. The Civil War began and the first death from the war was recorded.

As I walked through the fort’s museum and studied each display, it seemed that all the complicated history of the war and the reasons why it happened finally boiled down to one raw fact; cotton was king. Wealthy southern landowners needed slaves to maintain their large cotton plantations, northern banks were woven into the cotton economy and New England textile mills relied heavily on it. Cotton, along with tobacco and sugar was a worldwide luxury commodity and between 1803 and 1937 it was America’s leading export, much of it going to Britain whose textile industry accounted for 40% of its exports. In short, the economics of cotton ruled the land.

Trans-Atlantic slave trade (the middle passage) ended in 1808 but only after nearly 400,000 Africans were transported directly to the U.S. Charleston was known as the slave trade capital, accounting for almost half of the number of people that came into this country. But there was also a second middle passage which involved far more black people and that was the internal or domestic slave trade that peaked from 1830 to 1860 when cotton was king. Of the 3.2 million slaves working in the 15 slave states in 1850, 1.8 million worked in cotton.

Cotton’s value was considerably lower than that of slaves. Slaves were three times more valuable than livestock and twelve times more that of the entire U.S. cotton crop. While the price of cotton and land declined, the price of slaves increased. And we can thank the cotton gin for that by increasing slave productivity tremendously, which led to higher profits and increased demand for slaves. On the eve of the Civil War, there were over 4 million slaves in the United States, owned by a relatively small portion of the southern population. Slave-labor cotton was so profitable it took a civil war and over 600,000 lives to end it.

By the 1830s, abolitionists were becoming more influential. And when Harriet Beecher Stowe’s Uncle Tom’s Cabin was published, it started a wave of anti-slavery sentiment. When Abraham Lincoln met Stowe, he said to her “So you’re the little woman who wrote the book that started this great war.” And the abolitionists had their martyr in John Brown after he was tried and hung for treason following his attempted raid on Harper’s Ferry. Not only that, immigrants mostly from Germany and Ireland during the potato famine of 1840s and 1850s became an available pool of low wage laborers, decreasing the need for slavery. One by one, northern states began to abolish slavery. Finally, the creation of the Republican party in the 1850s and subsequent election of its first presidential candidate, Abraham Lincoln, got the ball rolling in the right direction, except there was a powerful resistance and it all began in South Carolina.

What began at Fort Sumter on April 12, 1861 and ended at the Appomattox Courthouse on April 9, 1865 was the tragic result of a clash between a slave-dependent economy and the very fact that slavery is wrong. It is befuddling to think of how so many poor men, simple farmers and laborers joined a confederate force to fight their neighbors when the reality was that the secession attempt was about maintaining slave-dependent wealth. Somewhere in there, people were riled up into believing that the federal government was going to swoop down and steal all their rights. While abolition was moving the country in the right direction morally, it would be at the expense of a very powerful institution and the wealth it brought to many white people. In short, the federal government was taking away the right to own human beings as laborers for personal gain. In Michael Shaara’s partially fictional book about the battle of Gettysburg “The Killer Angels”, he describes a scene where a union soldier asks some confederate prisoners why they are fighting. When they answered, “We’re fightin’ for our rights”, the union soldier confused the word ‘rights’ for ‘rats’ and was even more confused to learn the confederates were not fighting for slavery.

As cliché as it may sound, we have put our home on the road and have gone to look for America. And it is this leg of our trip that we have become so immersed in the Civil War, that it seems every day we think about it and try to wrap our minds around this country’s great tragedy. How could this have happened? After so many lessons learned on this trip, it remains incomprehensible.

During our stay at Santee State Park, we welcomed temperatures below 80 degrees during these final days of our low country tour of the southern states. Soon, we would begin making our climb into the Appalachian Mountains and maybe, just maybe feel a cooler breeze. But first, we had more southern hospitality to enjoy.

RV and travel issues and concerns

Issue 1: Laundromats or lack thereof. Our laundry duties come once a week. So far on this trip, we have stayed at campgrounds that offer nice laundry facilities – that is until now. Vivian who is usually the one in charge of laundry will do a Google search and read the reviews of local laundromats. There was only one laundromat in the nearby “town” of Santee and it got horrible reviews. And now we know why, the laundromat had seen better days decades ago. While waiting for the wash and dry cycles, we stayed on guard unnecessarily because every person doing their laundry looked completely exhausted and defeated, so safety was not threatened in the least bit. After that, not a day goes by that Vivian does not lament the fact our 32-ft RV cannot accommodate washer & dryer, and dreams of one day upgrading to one that can.

Issue 2: We bought a flow meter to attach to our water hose so we could evaluate how well we conserve water. We learned while at Santee that we could get it down to about 12 gallons per day, including both of us showering each day. This knowledge will come in handy when we find ourselves in a campground without water or sewer hook-up, and that day is coming.

View all posts by Constance Mier

What does an old family photo of a child playing with her dad’s cigarettes have in common with a beautiful county park with a stained past and a living history museum? They are tied in to our visit to Winston-Salem, and you can read about it in our latest blog, linked in profile. #winstonsalem #tanglewoodpark #rvtravels #rvliving #fulltimervlife #homeonwheels #fifthwheelliving #travelusa🇺🇸 #visitnorthcarolina #oldsalem
As retired fulltimers, we look forward to Sunday afternoons in a state park. Unknowingly dropping my wallet in front of the RV in clear view made me think, is it more or less safe to be in a crowded campground than be the only one? At any rate, please check out our latest blog, linked in bio. This one about our stay near Charleston. #fulltimerv #rvtraveling #rvtravels #homeonwheels #ontheroad #fifthwheelliving #rvlife #rvliving #travelblogger #travelusa #visitsouthcarolina #travelsouthcarolina
Not able to travel with our Everglades canoes or kayaks with our 5th wheel & truck, we got ourselves an inflatable kayak. This has been a wonderful thing & I know why so many RV’ers have them. This is from Ebenezer Creek near Savannah. #inflatablekayak #ebenezercreek #exploregeorgia #paddlegeorgia #visitgeorgia #rvtraveling #rvtravel #homeonwheels #rvlife #rvliving #fulltimerv #fulltimervliving #ontheroad #travelusa
While parked near Savannah for a week, we paddled the kayak on Ebenezer Creek where tupelo & cypress trees surrounded us. And while in Savannah we found refuge in the air conditioned Cathedral of St John the Baptist. Drawn to both these beautiful places, it was the Cathedral of Tupelo & the story of the betrayal on Ebenezer Creek that grabbed our hearts. Check it all out in our latest blog, linked in bio. #exploregeorgia #paddlegeorgia #cathedralofstjohnthebaptist #savannahgeorgia #visitgeorgia #swampthing #rvlife #rvtravel #rvtravels #homeonwheels #fulltimervers #fulltimervliving
Follow Changing Views From Our RV on WordPress.com
%d bloggers like this: