“The fact is, they’re floodin’ this valley so they can hydroelectric up the whole darn state. Yessir, the south is gonna change.” Ethan and Joel Coen.

Having three days to spend at Lake Guntersville State Park, we decided to use one of them to visit the “city”. We drove the infamous Highway 227 down into a valley to the small town of Guntersville of which 40% is comprised of water. We found ourselves in the Guntersville Museum for a couple hours and it is there that I learned how the Tennessee Valley Authority changed the south.

The Tennessee Valley Authority (TVA) was created in 1933 as part of Franklin D. Roosevelt’s New Deal. It had three goals – improve agriculture practices, provide electricity to much of the rural south and tame the Tennessee River. Essentially, the TVA changed both the economic and ecologic face of the Tennessee River Valley that included Tennessee, Alabama, Mississippi, Kentucky, Georgia, North Carolina and Virginia.

The recorded narration in the museum’s display described the bold construction of 16 dams and a steam plant. To achieve its goals, as the narration goes on to describe, the TVA was given the power to remove families from their homes and relocate them. Ultimately, the dams provided access to electricity for the first time to a vast area of the south and the TVA continues to be the largest public utility and power supplier in the United States.

This got me thinking about the greater good. There was great distrust and cynicism toward the government when Roosevelt created the New Deal as there was (is) distrust toward the Affordable Healthcare Act. I suppose part of that has to do with the fact that when there are effective wide spread changes, there are going to be winners and there are going to be losers. But in theory, these changes are created to minimize the losing side and over time, lead to a greater good. But, the seemingly biggest losers appear to have the loudest voice of opposition. Case in point, the TVA’s most vocal critic was Wendell Willkie, president of the largest utility company, the Commonwealth and Southern. Despite his opposition, Willkie negotiated with TVA and eventually ceded – “We accept the inevitable with good spirit and are selling our properties at as good a price as we can get the government to pay.”

Despite opposition, the TVA moved forward and transformed the south, providing thousands of families and farms with a higher standard of living. But of course, there were losers. A more recent example of the losing end was in 2008, when the TVA, being one of the largest coal industry customers created the country’s largest coal ash spill, smothering over 300 acres of land and several houses. 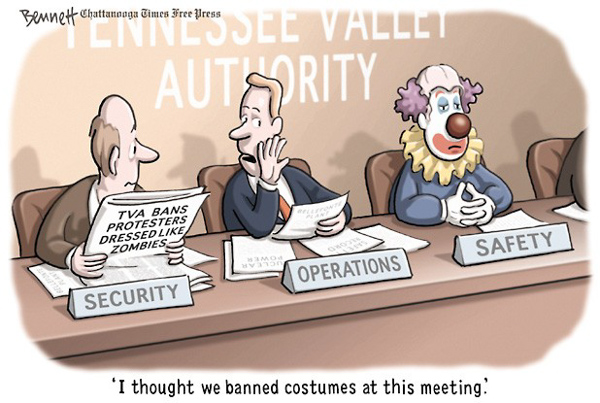 And then there is the story of Jim and Mattie Randolph and their seven children, one cow, one pig and sixty chickens back in 1936. To accommodate the hydroelectric dam projects, the Randolphs were one of thousands of families forced out of their home and relocated. The story of “plain stubborn” Mattie Randolph is a popular one because she refused to the bitter end to leave her two-room log cabin and 14-acres of land as the Norris Dam reservoir was being created. The TVA personnel that were charged with evicting the Randolphs could not understand why the family wished to remain in their home rather than live elsewhere in better conditions. A caseworker wrote, “The six children seemed happy, but why or how is the question – [The Randolphs] have very limited experiences, do not want a better place to live, or electric lights, or a bath room, or any other high-falutin thing.” The Randolphs had no understanding of the TVA and what it was all about. That is because the Randolph’s world did not reach beyond their 14 acres, that was all they knew or cared to know.

Currently, American citizens are waging a war against each other all in the name of government politics. It seems “the greater good” has two very different interpretations, depending on which side you’re on. I think of the New Deal, the Great Society and the Affordable Healthcare Act and wonder why so many resisted these government-mandated changes. Is it simply because we don’t take kindly to our government imposing social experiments that disrupt our own personal world? It probably is not as simple as that, but then again, maybe it is. At least for Mattie Randolph who lost her entire world, it was.

View all posts by Constance Mier